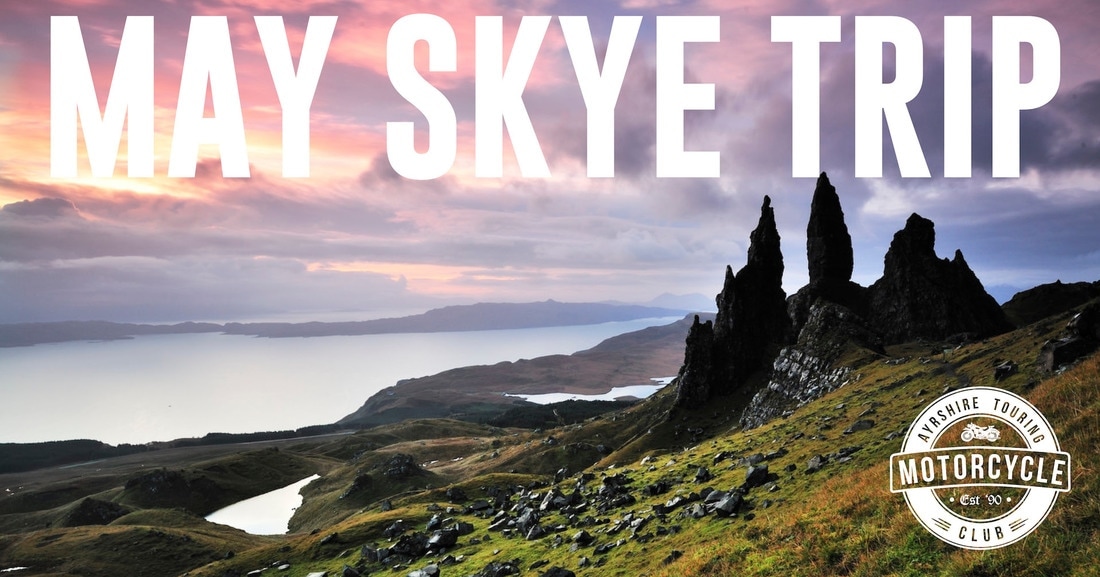 This was a weekend run which left at 9am on Saturday 27th May with several stops for coffee, photos and food reaching Skye around 6pm. The Sunday itinerary included visits to ruined castles and viewpoints and a run around the island. Some members left on Sunday, others headed homeward on Bank Holiday Monday (29th May) via the Armadale - Mallaig ferry. We stayed  at the Cowshed Bunkhouse near Uig for two nights which was just £20pp per night.
​Another great run with plenty of entertainment and we managed to acquire some spare parts for an MT07...
Skye Run Report
Author Smoothrider: aka Lindsay (see photos below)

Graeme, Mitch, Rachel, Billy and myself left from Bellfield at 9am and headed up to the Erskine Bridge without having to travel via the Learners’ Loop.  The weather was dry and warm, a good day for biking.  We got as far as Inverarnon before our first rather amusing mishap.  Graeme had stopped behind a van that was turning right into the campsite.  He put his left leg down and felt his hamstring ping.  His automatic reaction was to lift his leg again only to topple complete with bike onto the grass verge.  Thankfully the only damage, apart from the hamstring, was a bent clutch lever. The rest of the run as far as the Green Welly was uneventful until I managed to hit a dip in the paving of the road in to the car park and put my foot down only to find nothing solid to put it on.  I was hidden from the others by a minibus, so they were all a bit confused to see me pushing Misty into the car park and holding a destroyed brake lever in my hand!  We thought that was the end of my weekend but Graeme contacted Lix Toll then road the 34 mile round trip to save the day.  We finally got back on the road only for me to decide to make a total arse of a junction and lie Misty down again giving Rachel an awful fright into the bargain.  Thankfully this time there was no real damage done. The rest of the journey passed without event until we reached the Cowshed Bunkhouse.  The road up to it was uphill, twisting, full of potholes and gravel.  Graeme and Mitch got up to the bunkhouse without a problem.  Rachel cursed Graeme all the way up while I got things totally wrong at the bottom and then panicked.  I ended up going far too slow around one of the bends and dropped Misty once more.  This time the left foot pedal sheared off!  Geez I was glad to get off that bike.

The bunkhouse was really nice, 6 beds to a room, all with privacy curtains.  It was clean, had plenty showers/toilets and cooking facilities. There was a good sized dining area and a very comfortable sitting area with a great view of Uig harbour where we could watch the comings and goings of the Western Isles ferry and the practice launch of a lifeboat!

On Saturday, after a hearty breakfast, Billy got packed up ready to head home while the rest of us prepared for a tour of Skye.  Unbelievably the sun was shining!  We rode up to the north end of the island to bag a wee checkpoint but were all disappointed to find that the promised hotel serving teas, coffees and cakes was a figment of our imaginations.  Mitch and Rachel had even walked up with purse/wallet in hand. We then rode on until we found a lovely wee coffee shop that served delicious cakes. We then rode on to Portree along roads full of smooth n=bends and generally with very good surfaces.  Quite a fun ride and no mishaps. After a spot of food shopping in Portree we went off to find Dunvegan Castle.  We did find where it was located but true Scottish style refused to pay the entry fee when it was 30 minutes before closing.  Instead we decided to ride out to Point of Neiss.  This was an extremely interesting ride along single track roads with sheep, potholes and loads of tourists.  We all became extremely adept at choosing exactly where to stop to keep ourselves safe.  Even then, tourists still opened car doors on single track roads when we were dodging potholes!!!  It was worth the trip though, as the views were stunning.

On the Monday morning we had breakfast then packed up ready for the journey home via another checkpoint involving a short ferry crossing.  However, we missed the ferry and decided that waiting for the next one would really hold us up.  We drove to Broad... to wait for Mo and Leo who had ridden up on the Saturday but stayed on the mainland.  After a lunch break it was time to head for home.  By this time the rain had started and didn’t stop all the way home.  We took the Glenelg ferry, which might have been fun on a dry day but the road is single track with lots of ups, downs and twists.  The ferry is interesting though with its turntable top.  Once back on the mainland it became a miserable trek with only occasional stops to give us relief from the rain.  We did manage to bag another checkpoint but standing in the rain having photos taken was no fun.

All in all, even with the mishaps and the rain, it was a great weekend. 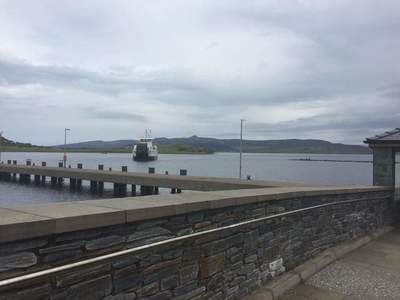 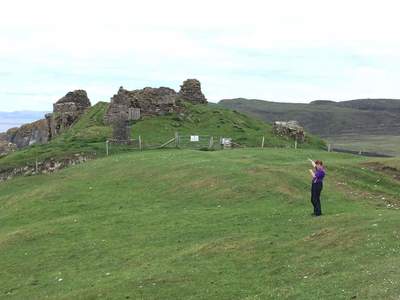 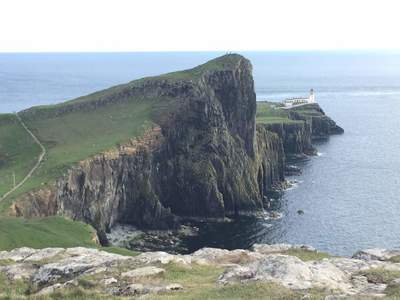 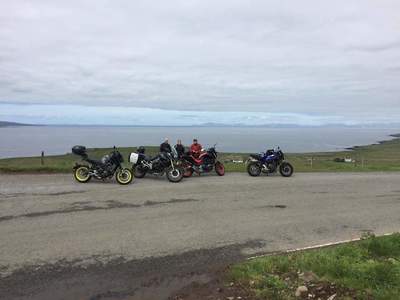 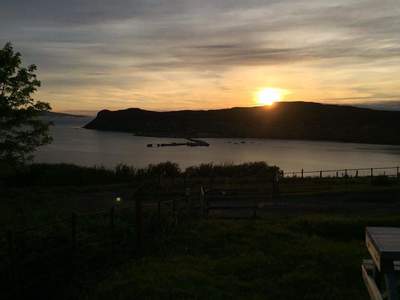 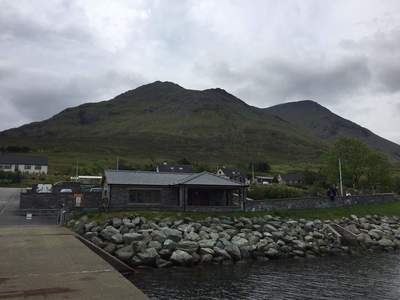 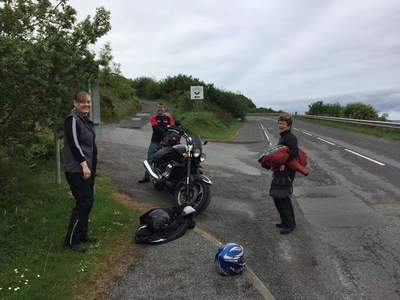 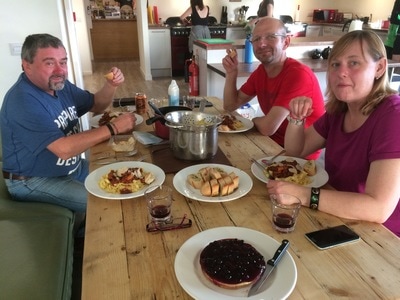 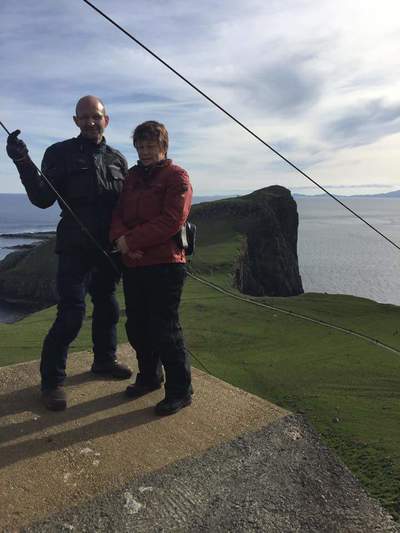 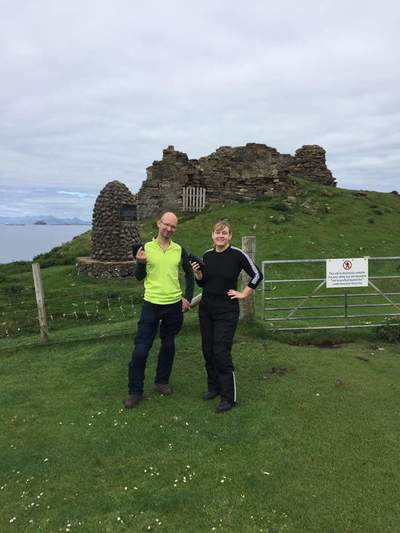 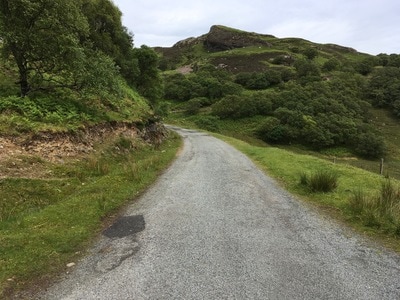 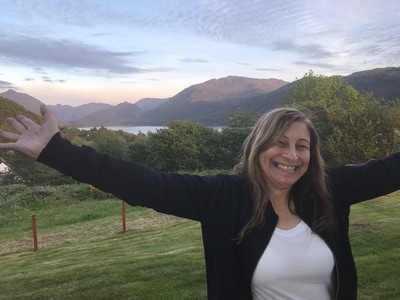 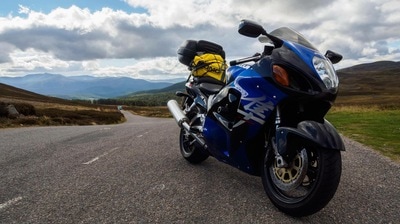 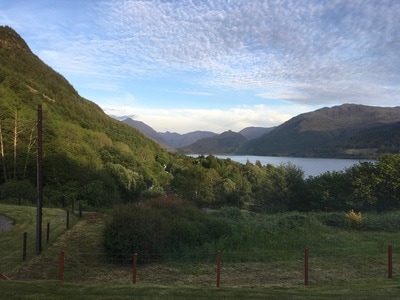 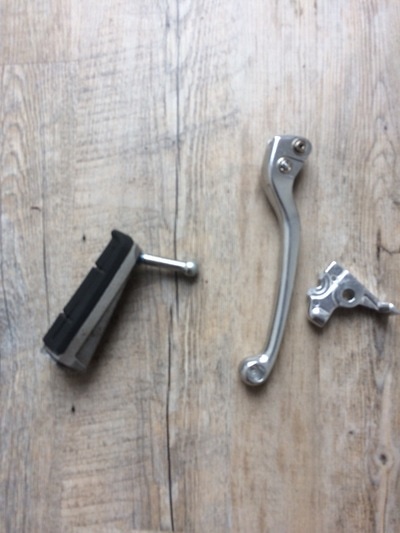 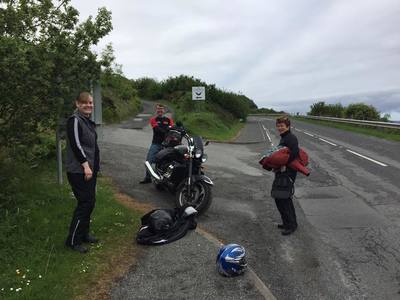 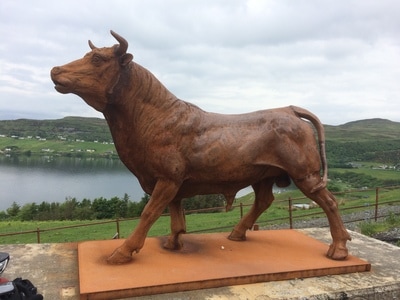 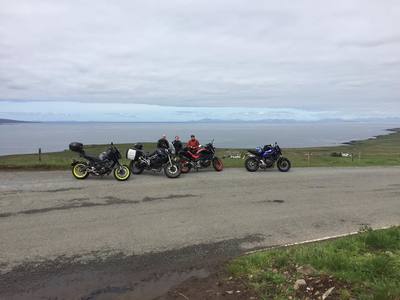